A fishing trip to Alaska to go after trophy-grade salmon is the vacation of a lifetime for many anglers. Once you are in your boat going after these great fish, you’ll realize you have a chance to go after record-setting fish and win a trophy. Once you bring in one of the huge trophy salmon, you will probably be hooked on salmon fishing for the rest of your life.

The king salmon fishing season goes from mid-May through mid-July. The record king caught in the Matanuska Susitna Valley is 68 pounds, and it was caught in 2007. It’s not unusual to bring in king salmon that are 30 pounds or more. The best way to go about catching trophy fish is to reserve a guided fishing charter that will take you on the Deshka River. This is about 90 miles south of Anchorage. 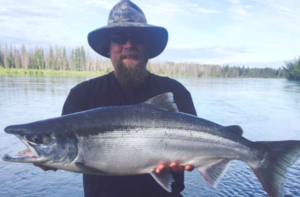 The sockeye salmon share the same fishing season as the silver salmon. You can go after them from mid-July to late September and in some locations in southern Alaska all the way through mid-October. Like the silver, the sockeyes are great fighters and you’ll have a real battle on your hands when you get one on your line. Most of the sockeye salmon are 4 to 10 pounds but some of the bigger ones measure in at 12 pounds.

Buying Land For Sale: Consider These Factors Before...

Find The Best Services In Town

All You Need to Know About Setting Up...